We can probably all name our favorite superhero off the top of our head. We love them unequivocally and often times see them as a moral center point.

However, Source Point Press creators Dirk Manning and K Lynn Smith explore the moral gray area surrounding superheroes in their Free Comic Book Day title Hope #1! Manning and Smith seek to discover what it means to be a superhero when the lines between “good” and “evil” aren’t as clear cut as they traditionally appear.

Check out our interview below with creators Dirk Manning and K Lynn Smith to find out more about what to expect from their take on the superhero genre, as well as some of the comics they’re into right now and where you can find them on Free Comic Book Day! Then, make sure to read through our PREVIEWS Prevue of Hope #1! 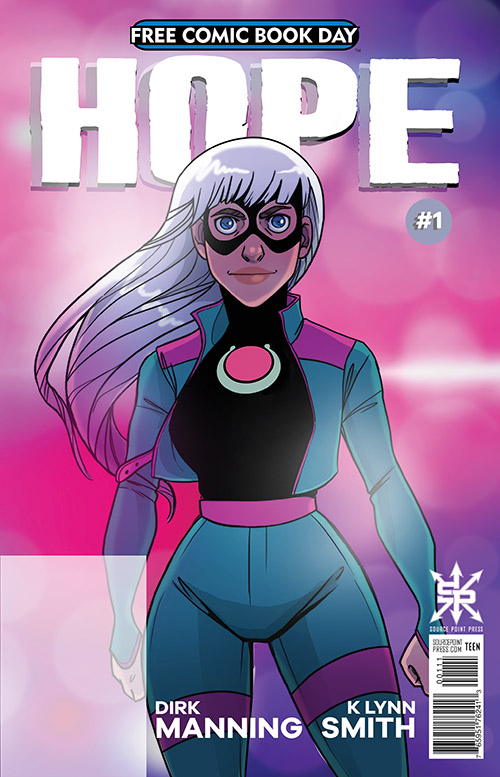 Dirk Manning: Hope is about a woman who has secretly moonlighted as a costumed “Ultra” for years, only to have a very unexpected situation within the first five pages totally change her life – as a hero and otherwise – in an instant.

K Lynn Smith: It’s about a superhero who finds herself in a situation she can’t punch her way out. It blurs the line between good and evil and tests the limits of what one could do and what one should do when things go to hell.

Manning: Is it pandering to say that a big part of it is working with K. Lynn Smith? [laughs] I mean, yes, it’s also fun to be the “horror guy” who’s bringing in a fairly new take to the superhero genre… but getting to develop this series with K. Lynn, someone who’s work on books like Plume I’ve been a fan of for years, has been a dream in what you might otherwise call a NIGHTMARE WORLD…

Smith: Dirk’s right. The best part is me. [laughs] But in all honesty, it’s been a breeze to work with Dirk. I know Hope has been his baby for a while, so being allowed to step into this world and help remodel is an honor. It’s fun to explore a genre that both of us haven’t before and to tear apart that mold.

Smith: We’re proud of this book and believe that Hope could be one of those titles that’ll stick with you. It opens up a very serious conversation about the hierarchy of not just this make-believe world, but about our own as well.

Manning: It’s also the full first issue of a new six-issue mini-series. We – and Source Point Press – believe in the book so much that we’re willing to give everyone the first issue for free. It’s a powerful, emotional read… so we’re confident that people will be returning to their local comic shops for the rest of the series every month after this.

Manning: To me it’s Saga, hands down. Hope, like Saga, is a very emotional book about family – including what it’s like to have a child in challenging circumstances. If you’re missing Saga, Hope will fill that void in your heart… right until we tear it out! [laughs]

Smith: Well, it’s not a comic (though, it’s been adapted to one soon after), but Hope has a very The Incredibles feel, in how society reacts to superheroes, and how the family dynamic is tested because of it.

Manning: The cast of this book expands pretty quickly with more heroes and villains alike even as Hope’s life starts to spiral out of control, but I’d say get ready for The Drama King, for starters. When I described a pivotal scene with him to K Lynn in Issue #2 it gave her nightmares! [laughs]

Smith: True fact. Dirk doesn’t know this yet, but his design will be largely based on him. All the villains, actually.

Manning: The serial nature of the medium. I’m a voracious reader, so I was immediately drawn to the fact that I could get more of the stories I liked every month.

Smith: I’m a visual person, so I love me some art. Comics are so amazing because they not only tell a story through dialogue, but through visuals and colors as well.

Smith: I read the heck out of Disney’s Tailspin when I was little. There were other little Disney comics I would read, all on display at the checkout counter at the grocery store, but I remember Tailspin the most.

Manning: The Incredible Hulk #364 by writer Peter David and artist Jeff Purves in January 1990. It was right after Christmas and my local skateboard shop started carrying this massive wall of comics, and I liked the “Countdown”” clock on the cover so I picked it up… and I became hooked on the medium.

Manning: The Goon by Eric Powell, Stray Bullets by David Lapham, Savage Dragon by Erik Larsen, The Walking Dead by Robert Kirkman and Charlie Adlard, and anything by Joe Hill or Alan Moore… for starters. Source Point Press is now also releasing more and more amazing titles through PREVIEWS every month, too, of course.

Manning: The people – be them fellow professionals or readers. The comic industry as a whole is filled with some of the most talented, passionate, and just plain ol’ fun people walking the Earth today, bar none.

Smith: There’s a certain kind of freedom in this industry that you don’t get from other careers, a freedom to be creative and fun and extremely weird. Seriously, the weirder the better. It is a great world to be in.

Smith: Through comics, we can escape into different universes and meet fascinating characters. And every month, new worlds are being created.

Manning: The diversity in the medium is amazing! Seriously! Look past the front of the catalogue or go walk around Artist Alley at a local convention and you’ll find all kinds of new books that you’ll soon be sad you didn’t know about sooner… such as Hope!

Manning: Mine’s a bit personal, but here goes: My first ever signing as a professional was at Packrat Comics in Hilliard, Ohio. I had one little more-or-less self-published copy of Nightmare World with me, and hardly anyone showed-up, but store owners Jamie and Teresa treated me like gold. They were amazing. I told them at the time “This doesn’t mean anything to you now, but I promise you I will always come back.” Fifteen years later the store has since won the Eisner Spirit of Retail Award and I have released over a dozen books… but I still go back every year for Free Comic Book Day, and this year I’m launching a brand-new series with them on the day of the signing. It’s a surreal and humbling feeling.