Sometimes, you just have to keep swimming when things don’t go your way. You have to be like a shark and keep moving forward. That’s especially true when you find yourself being chased down by actual sharks!

Such is the situation Alex Parrotfish finds himself in on his way to New Coralton. Unfortunately, that isn’t the only less-than-ideal situation Alex is up against in Arcana’s Free Comic Book Day title, Go Fish. But the hostility of the big city and those who inhabit it isn’t enough to crush Alex’s optimism or his good Samaritan spirit.

Check out our interview below with Go Fish writer Sean O’Reilly to find out more about what adventures await Alex in the big underwater city of New Coralton! Sean also told us a little bit about his love of comics and where you can find him on Free Comic Book Day!

After you read the interview, be sure to check out our PREVIEWS Prevue of the book! 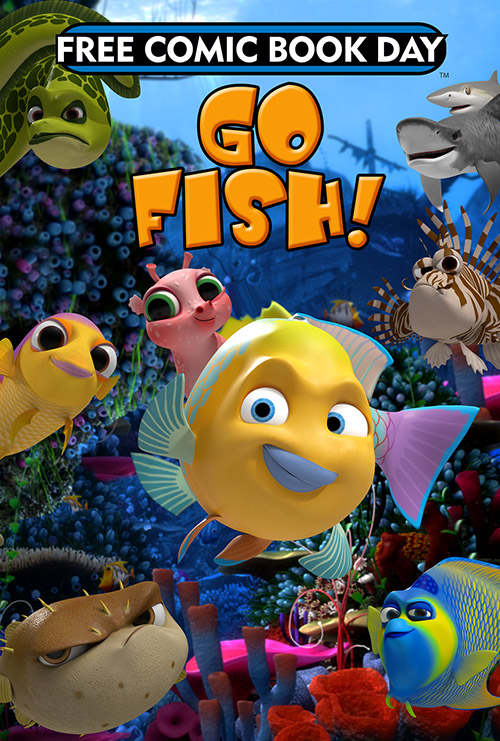 Arcana’s latest contribution to FCBD sees the introduction of a new character: Alex Parrotfish, a bright-eyed, hopeful, young fish who is moving to the big city in search of his first job. Go Fish is the thrilling tale of Alex’s shark-dodging, far-from-straightforward journey to New Coralton, the most busy and bustling metropolis found beneath the waves. But as many small-town fish soon find, the big city isn’t as friendly as their hometown reefs, and it isn’t long before Alex feels lost and lonely. But even the hostility of the city isn’t enough to kick the good Samaritan out of Alex, who rises to the occasion when dangers floats over New Coralton.

Creating stories has always been my passion and working on Go Fish has been an amazing experience.  As Arcana has developed and grown, I have less time to write and create stories.  So, when I do get the chance to put pen to paper I jump at the opportunity and find comfort in developing new ideas.

In Go Fish, life underwater is anything but a beach: things are just as fast paced as they are topside, and predators can be found on every current. If you like classic stories about a small-town kid making it in the big city but with a fishy twist, you should pick up Go Fish.

Anything fun and energetic for kids! Go Fish is about friendship, teamwork, and doing what's right. Trying new things in the face of failure is a major theme as our characters are seemingly small fish in a big ocean.

When you close Go Fish, Alex’s adventures are far from over. In fact, he’s due to make an appearance on the big screen! That’s right, the continuation of Alex’s adventure will be presented in an all-new animated feature. While the big bad city turns out to be not so big and bad after all, it’s not other fish Alex should worry about. Topside forces can make some pretty dangerous waves; Alex Parrotfish and his fellow citizens can’t float easy just yet.

My love of comics came at a very early age through the pop-culture of my youth like The Muppets, Transformers and X-Men. To be able to publish comics is fantastic and my favorite part are definitely the characters and the world-building.

Transformers #1 by Marvel, the G1, was the very first comic I purchased with my own money and I loved Transformers. My first non-licensed comic was Secret Wars #4 and that completely blew my mind. But it wasn’t until X-Men that I was hooked as a collector ‘freely roaming’ around the Marvel universe collecting backwards, forwards, sideways and more.

I’m loving Star Wars with all the canon backstories especially that of Darth Vader.

Every time I love a TV series, a movie or a comic book, it is almost universally because of a key character or characters that I love. I still consume all types of media and that has undoubtedly shaped who I am today and is the reason I love working in comics.

Comic books are such a unique medium where the time and effort of production required to have someone talking is about the same time and effort required for an epic space battle. Movies, TV shows and even video games and animation can’t say that, so it allows a boundless unique vision to come from a single voice. Truly, it’s a remarkable medium where anything can happen.

Being able to share so many wonderful stories with so many amazing people.  FCBD is truly an amazing event because of its potential to inspire and spread stories across the globe.

FCBD: Where do you plan on spending Free Comic Book Day?

Metropolis Comics in Burnaby, BC, Canada!