(BALTIMORE, MD)- On Saturday May 7th, over 2,300 comic book shops across North America and around the world will give out over 6 million comic books—free of charge—during Free Comic Book Day (FCBD).  The annual event is one of the most anticipated comic book celebrations of the year as retailers prepare to welcome curious, first-time comic readers and devout comic book fans into their stores for fun events and free comics.

“Free Comic Book Day is the perfect occasion for newcomers to comics as well as those who have been reading them for years to celebrate comics and discover new titles that debut on the first Saturday in May,” said Free Comic Book Day spokesperson Dan Manser.

The 50 free comic books available this year are designed to appeal to a broad range of tastes, including super hero stories like Marvel’s Civil War II and DC’s Suicide Squad; kid favorites that are great for readers of all ages with Pokémon, DC Super Hero Girls, Grumpy Cat, Sonic the Hedgehog; stories that feature classic characters such as Strawberry Shortcake, Pink Panther, and Archie; and TV tie-ins featuring series like Doctor Who, Bob’s Burgers, Sanjay and Craig, The Simpsons, Firefly, and many more.

“On May 7th, we encourage fans to use Free Comic Book Day as an opportunity to explore their local comic book shop, seeing all it has to offer,” said Manser.  “Hopefully, they’ll walk away with free comics they can't wait to read, and then keep coming back to their local shop for more!”

Along with free comics, many comic book shops will feature events during the day including creator signings, appearances of costumed characters, and great deals on exclusives and sale items. To view all 50 free titles and to find a participating comic shop, fans are encouraged to visit www.freecomicbookday.com.

ABOUT COMIC-CON HQ-- A partnership between Comic-Con International and Lionsgate, Comic-Con HQ is an ad free subscription video-on-demand (SVOD) network streaming all things Comic-Con year round. Free Beta access to Comic-Con HQ will begin May 7th on Free Comic Book Day via browsers and iOS/Android devices. The paid subscription service will roll out across more connected devises such as Roku, AppleTV and Xbox One following the official launch shortly before San Diego Comic-Con in July, with additional devices and distribution platforms becoming available throughout the year.

ABOUT FREE COMIC BOOK DAY—Free Comic Book Day is the comic book specialty market’s annual event where participating comic book shops across North America and around the world give away comic books absolutely free to anyone who comes into their comic shops. Celebrating its 15th anniversary in 2016, the event is held the first Saturday in May each year and is the perfect opportunity to introduce friends and family to the many worlds of wonder available at local comic book shops. From super-heroes to slice-of-life to action/adventure and beyond, Free Comic Book Day has a comic book for everyone! www.freecomicbookday.com.

ABOUT DIAMOND COMIC DISTRIBUTORS (DCD)—Diamond is at the nexus of comics and pop culture. Based in Baltimore, MD, DCD is the world's largest distributor of English-language comic books, graphic novels, and related pop-culture merchandise, serving thousands of retailers worldwide. For more information, visit Diamond on the web at www.diamondcomics.com. 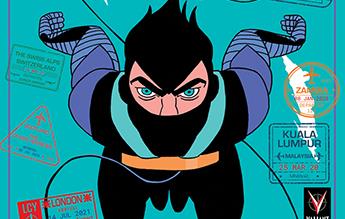 #FindYourStory in a Powerful Uprising
Jul 29, 2021

It's out with the old and in with the new on FCBD21 with Valiant Uprising!

Cover Art Revealed for Dark Horse's Avatar: The Last Airbender and The Legend of Korra
Jul 19, 2021