Gianfranco Manfredi (GM): "Magic Wind is a Wild West adventure, with glimpses of Lakota belief and ritual, and American history at the end of XIX century. The series is a strange mix between classic Western and Horror/Thriller. “

Pasquale Frisenda (PF):  "Magic Wind presents a special version of America in the late 1800s and the history of the Wild West (documented and alternative at the same time), with particular attention to the darker aspects of the conquest of the West and the Native American mythology. The series originally published in Italy, had a large staff of excellent artists, Italian and foreign."

GM: "My hero, an American soldier who becomes a Lakota Shaman and his friend, a journalist called Poe, 'cause he is a double of Edgar Allan Poe.”

PF: "All aspects related to the world of the Wild West and Native Americans are of great interest to me: clothes, weapons, objects, environments and animals, towns, villages ... everything is very nice to draw.”

“In addition, there is a hero with many aspects of a his personality left to discover, the kind of character that as a reader, you do not "know" right away, but you discover more about, issue after issue.” 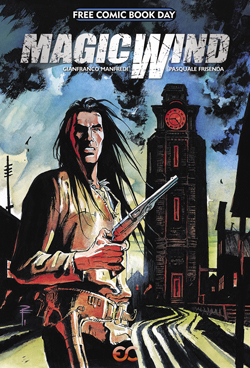 GM: "American readers could have an interesting view of some of the most eminent European artists, and their way of drawing a Wild West series-something really different."

PF: "For the chance to see a story set in the Old West that has a similarity with our present, as well as for the pleasure of encountering a thrilling adventure.

GM: "Maybe if you like a classic horror western such as Jonah Hex, you'll also appreciate Magic Wind, but I repeat: MW is something different."

PF: "I can think of movies like Unforgiven, Dances with Wolves, Wild Bunch, but also the stories of Edgar Allan Poe and Howard P. Lovecraft."

GM: "I create the scripts, but my biggest satisfaction is to suggest images to the artists."

PF: "Trying to create new worlds through my drawings and trying to “breathe in” the atmosphere from another time."

GM: "When I was young I was a passionate reader of Tex, a western comic book series that remains the number one comic book in Italy. Now, I'm one of the writers of Tex. So it's kind of a dream come true: from reader to writer."

PF: "The classics that here in Italy are still very popular, including Tex, of course."

GM: "Maybe I will spend the FCBD in L.A., where my daughter lives, and usually I meet her there once a year."

GM: "MW is a very long series: 132 episodes with many twists and turns. Currently, I'm working on a new long series called Adam Wild: African adventures of a Scottish explorer who fights against slavery."

GM: "Comic books are a fundamental part of the spirit of our age. You can't miss them!"

PF: "Comics are still a valuable tool for the dissemination of culture, both narrative and visual. Comics are sons of literature and cinema, both of which have always had a great influence on them, but thanks to the great imagination and amazing drawing of many artists in the world of comics, in turn, comics have influenced many other visual expressions, including the cinema.

“There is something immediate (as well as often entertaining) about reading comics and coming into contact with many passions and references that have prompted authors to create their own stories. This experience allows broadening of cultural horizons of even occasional comic readers.”

To see more work from Pasquale and Gianfranco, go to epicentercomics.com. 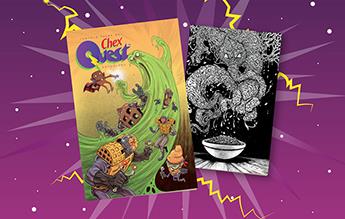 As part of Free Comic Book Summer, Chex Mix is excited to announce the release of the Chex Quest comic anthology, adapted from the beloved video game.