Ariol is your everyday tween donkey. He lives in the suburbs with his mom and dad. His best friend is a pig. He’s in love with a beautiful cow in his class. His teacher is a dog. His gym teacher is a huge rooster. In short, Ariol is just like you and me. He's just like you and me, but in France. And, well, is also a donkey. Emmanuel and Marc discuss the trials and tribulations of the French character in the scheme of American comics, as well as other topics.

FCBD: Please set up Ariol for a reader who might be new to the comic book.

EMMANUEL GUIBERT: Ariol is a nine-year-old kid who happens to be a donkey, a cool and smart blue donkey just like you and me. He's madly in love with Petula, a little heifer who sits in front of him in class. He hasn't yet dared to let her know, simply because he's only had 1,100 pages of adventures so far, and that hasn't been enough to overcome his shyness. His best pal is a turbulent piglet called Ramono. His favorite superhero is a super-horse called Thunderhorse. Ariol would give everything he owns to be a horse.

MARC BOUTAVANT: Ariol lives in a supportive world, an only child with his parents, whereas Ramono lives with his mother, a bit swamped and tired, and his sister, a howling adolescent pig. 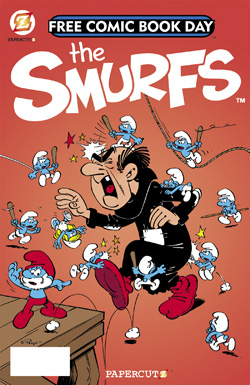 Both friends are very different, so they complement each other.

FCBD: How do you find the right tone when writing or creating art for younger audiences?

EMMANUEL GUIBERT: Let me quote an interview I gave to the Comics Journal in 2009 (it's already written in good English, with my pidgin having been properly edited). "I write for adults thinking about children and I write for children thinking about adults. I want to be clear, simple, and candid with the adults and subtle and engaging with children. It merely means providing them with all the truest things that life has taught us." And here's something a young reader once said to me: "I like your stories. First, I read them, and then, they happen to me."

MARC BOUTAVANT: I have to be the characters I draw so they can appear to be living their own lives. If for some reason I am not in the mood to draw them, they look lost.

FCBD: How does it feel to have Ariol coming out in America?

EMMANUEL GUIBERT: Ariol has been in China for a year, now, and I knew America's answer would come sooner or later. It's certainly a major event in the challenge between these two giants.

MARC BOUTAVANT: I'm glad Ariol is going to America. I have no fear; this little donkey is clever and will manage to settle into this new landscape. My only worry is Ramono; I hope he will follow Ariol's lead.

FCBD: What drew you to a career in comics?

EMMANUEL GUIBERT: My parents, who strictly prevented me from becoming a lawyer and obliged me to write and illustrate silly stories, even during holidays.

MARC BOUTAVANT: It's really who drew me to it: Emmanuel Guibert. I was not meant to draw comics; too much hard work. But Ariol convinced me. Emmanuel's world promised great and touching stories.

FCBD: What were your favorite comics when you were young?

MARC BOUTAVANT: Every comic I had in hands was my favorite at the moment. But I especially liked Leo Baxendale's Eagle Eye, Junior Spy: 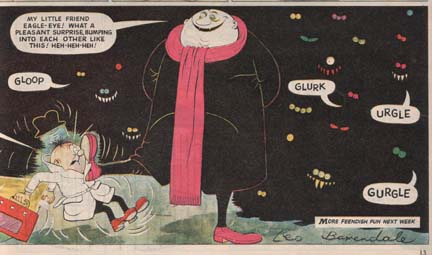 A few years later I jumped into Marvel Comics, and I still wonder how I could use Jack Kirby's drawing lessons in my own work.