The Free Comic Book Day 2013 Silver book Steam Engines of Oz  is a special sneak peek at the upcoming re-imagining of Oz through a SteamPunk lens.

Now Erik Hendrix (VP of Publishing and Co-Writer, Arcana Comics) talks about the new storyline, working in the comic book business, the future of Steam Engines of Oz and more in Freecomicbookday.com's exclusive interview.

FCBD: What has been your favorite part of the book or character to tackle?

Erik Hendrix:  Just wrapping our minds around the HUGE world of Oz has been quite an experience. L. Frank Baum created such a realized world, it's a real joy to set a story in it, while still telling something new and different.

Erik Hendrix: Because The Steam Engines of Oz is going to be AMAZING! Great story, stellar artwork from Yannis Roumboulias, and, oh yeah, you're getting it FREE on Free Comic Book Day. Can't beat that!

Erik Hendrix: If you like books with strong female leads, great characterization, and something to fill your head with wonder, you'll love The Steam Engines of Oz.

Erik Hendrix: Telling stories. Since I was a kid, I was reading comics and was always enthralled by the different worlds and characters writers and artist came up with. Now that I'm creating comics myself, I'm getting to let all of these ideas in my head out and onto paper. There's nothing quite like seeing when artists draw things you wrote and it's even better unleashing that on the world.

Erik Hendrix: I read a lot before it, but they all blur together in my head... The comic that turned the tide for me was Uncanny X-Men #203. Something about the mixture of Chris Claremont's epic long-form writing of superheroes and drama and John Romita Jr's artwork sealed the deal for me.

Erik Hendrix: I'm not sure where I'll be yet this year! Last year was Los Angeles. Maybe this year will be someplace like Las Vegas. We'll see!

Erik Hendrix: They're an inventive medium that combines the best elements of writing and artwork to convey a story. For people just learning to read and people who want to read something different, comics are NOW.

Be sure to visit Freecomicbookday.com often to check out previews of this year’s books and to learn more about the creators involved. You can also follow all the latest FCBD news on Facebook and Twitter. 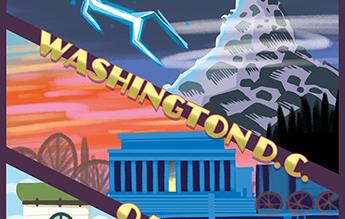 Find adventure in a myriad of worlds that are sure to bring you 10 Tons of Fun!

Cover Art Revealed for Dark Horse's Avatar: The Last Airbender and The Legend of Korra
Jul 19, 2021