Pop Culture Network:
Get Into Comics

A comic book or pamphlet is the traditional periodical form most people are familiar with. A comic book can stand on its own or be a part of a series. A series is also sometimes called a title, which refers to the entire series, not a single, discrete unit.

Sometimes, multiple issues of a series are collected into one volume. It can be hardcover or softcover. Softcover editions are often called trade paperbacks, or just trades, regardless of size. A hardcover or a softcover can also be called a graphic novel.

When a story is published in the hardcover or soft cover format first (that is, without periodical serialization), it is referred to as a graphic novel and only a graphic novel.

Many of these terms are interchangeable, as you can see. A graphic novel can refer to a hardcover or soft cover, to a reprint collection or an original story. Similarly, all of the formats referenced can be called comics or comic books.

The Japanese word for animation has become associated with Japans unique style of animated films and television. Anime encompasses many different genres and is typically either adapted from or into manga.

Usually refers to the illustrator of a comic. Artists are divided among three specific groups: penciler, inker, and colorist. Traditionally, the three tasks were handled by three separate individuals, but today, it is becoming more and more common for a particular title to have one artist do all three tasks, or a combination of any two.

Refers to a trade paperback or digest that collects individual issues of a comic book series into a bound volume.

Used generically in the industry to refer to any sort of literature that combines story and art, whether as an ongoing series, mini-series, maxi-series, graphic novel, or other format.

The timeline of most ongoing comic book stories. All that has happened prior to a particular issue is adhered to in order to tell a cohesive story over many years. Continuity often also encompasses other titles that may be related to the title at hand. For example, if Superman and Batman have previously met, then they are considered to have interlinked continuity that has happened in Superman's world has happened in Batman's as well. (See Retcon.)

A term used to describe the writers and artists responsible for the production of a particular comic or graphic novel. Often times, a comic is the collaborative work of a writer and a team of artists, though it is common for one person to create an entire work single-handedly (e.g., Frank Miller's Sin City).

A story that continues from one comic book title to a separate title, usually involving the lead character(s) of each one appearing in both for the duration of the story. Historically, such a story will showcase the exploits of two popular heroes battling a common enemy. Sometimes crossovers can even involve characters from rival publishing companies, as when DC Comics and Marvel co-published JLA/Avengers, which united their two major super-hero teams for one story.

A collected edition that is reprinted at a smaller scale than a trade paperback (which is reprinted at the same size as the original comic). A digest typically measures 4" x 5" and thus fits better on a traditional bookshelf and in a small reader's hands!

Familiarly known as "the Eisners," the annual Will Eisner Comic Industry Awards recognize the finest stories, publications and creators in the medium. The awards are named for the late Will Eisner, the writer/artist credited with creating and popularizing the storytelling format of the graphic novel.

The period of time during the 1930s and 1940s is generally considered to be comics Golden Age. Books published during this period are some of the most sought after and historic. The period gave birth to some of comics most enduring characters like Superman, Batman, and Captain America.

A comic book that is longer in format than the usual "pamphlet," and typically contains a complete story unto itself. Graphic novels usually have higher production values than the typical stapled comic; i.e. hardcover volumes, squarebound, or dust-jacketed. Although a graphic novel usually stands on its own as a complete story, it is possible to have an ongoing series or limited series of graphic novels telling a single story or series of related stories.

The Harveys are unique among awards given in the comics medium in that they are voted on entirely by professionals in the industry, meaning that winners are honored for excellence by their peers. This prestigious award is named after Harvey Kurtzman, co-founder of MAD Magazine and a seminal influence in the development of comics as a versatile storytelling vehicle.

Used to identify non-mainstream comics, independent comics are not tied to a major publisher and can encompass a vast number of genres. Usually, the term is associated with a particular style of storytelling and art not found in traditional super-hero comics.

The artist who uses black ink to enhance the initial penciled artwork. Inks are used to add depth and shadow to the images.

Responsible for placing and filling the word balloons and captions over the finished artwork.

A mini-series or maxi-series.

Comics that appeal to the broadest fan base. In the comic book industry, that fan base is predominately interested in titles that feature super-heroes.

Literally the Japanese word for comic book, manga typically refers to a uniquely Asian style of trade paperbacks from Japan, Korea, and China. Manga is usually smaller than traditional graphic novels (often digest-sized) and printed in black & white. Also referred to as manhwa.

Another term that refers to Asian styled comic books. The term is most identified with Korean manga.

A comic book series that is scheduled to run only a certain number of issues (usually more than six), and then end.

A comic book series that is scheduled to run only a certain number of issues (usually six or fewer), and then end.

Usually used in conjunction with "series." This implies a comic book series that has no ending planned and will continue until sales dictate its cancellation. An example is Action Comics, published by DC Comics, a series that has been published nearly continuously since 1938. Ongoing series can have a frequency from weekly to semiannually. Most are monthly or bimonthly.

A character's beginnings. Origins often set up the primary motivation for a super-hero's or super-villain's actions.

Used by some to describe the slim, periodical-like format of original comic books.

The basic unit of storytelling in a comic book. Usually square or rectangular, panels frame the action of a comic book and graphic novel. The placement and construction of panels on a page can represent anything from movement to time.

Responsible for the initial layout of a comic's art. Provides the basis for the rest of the books art, i.e. inks, colors, etc.

Voted on and presented by the National Cartoonists Society, the Reuben Award is bestowed upon illustrators in numerous categories, including comic strips, comic books, and animation. Winners have included many of the world's most famous cartoonists, including Charles Schulz (Peanuts), Scott Adams (Dilbert), and Will Eisner (The Spirit, and the man for whom comics' coveted Eisner Award is named). The Reubens are named for legendary cartoonist Rube Goldberg, who founded the Society.

A word made up from the words "retroactive continuity." Refers to a newly published story that changes or contradicts already-known details of a particular character's past. The new story takes precedence not only for all future stories, but also for all previous stories.

The period of time during the 1950s and 1960s is generally considered to be comics Silver Age. During this time, comics saw a resurgence in popularity and gave birth to such popular characters as Spider-Man, the X-Men, and the modern Flash.

A comic book page not broken up into separate panels, in which the artwork takes up the majority of the space.

A story arc is a specific story told in an ongoing series over a course of many issues. The story arc will often have its own title, with each issue being a "chapter."

The genre most associated with comics. Super powers, capes, masks, and more!

A squarebound edition that collects and reprints mini-series, maxi-series, or story arcs in this sturdier format, giving readers a complete story at one time, rather than over a period of months. Sometimes, a trade paperback may collect stories that are not interconnected, but rather are related by some theme. Many trade paperbacks also contain additional material not available in the original serialization, such as an introduction or foreword, or character sketches, much like "DVD extras."

The text-filled "bubbles" that contain a story's spoken dialogue.

Responsible for the story's script to be interpreted by the artist team. The writer plots the story, provides the dialogue, and lays the foundation for the book. 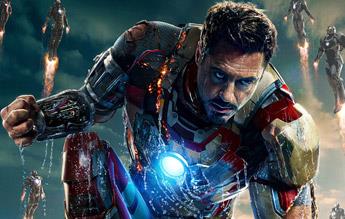 The influence and appeal of comic books can be seen in all aspects of popular culture, with comics inspiring hit movies, TV shows and award-winning novels.